Citizen Science: Mapping the birds of the region

In my last blog I did a review of the birding in and around Dalyan for 2015, which provided some good birding. I had managed to add some new sightings of species for me, bringing my tally to 199 birds, one bird short of my 200th for Turkey. I have also previously discussed the different types of bird list people keep, some only citing those birds that they see as ‘special’ ‘important’ were I tend to cite all the birds I see on each and every outing. I hadn’t really thought about this much until a friend sent me a link to:

In spite of its rich biodiversity, bird studies and conservation only started in earnest in Turkey in the early 1990s. While some surveys were undertaken in several smaller areas, the country as a whole has never been fully covered. All that changed in 2014, when Turkey was invited to be a part of the second European Breeding Bird Atlas.

Over the next three years, a group of Turkish birders will help to collect breeding bird information in representative squares in the country, in collaboration with the European Bird Census Council (EBCC). Particularly important areas will be marked on a grid so that all the ground is covered systematically. This study will shed light on the distribution and abundance of breeding bird species, and help improve bird conservation in the country.

Turkish birders and those visiting the country are asked to help complete as many squares as possible over the coming years. Access to large parts of the country is still considered safe, so if you are planning a birding holiday to Turkey and are willing to contribute your data you could help with this project.

I had always had a plan for the website http://www.dalyanbirding.com to include a birding map, say on Google maps, of where I had photographed each species, but have never got round to doing it, like I have not got round to updating the look and structure of the Dalyan birding site (work in progress, very slow progress).

I emailed the organizers of the ‘Turkey breeding Bird Atlas’
and received a prompt reply with an explanation of the data collection zones and methodology, unfortunately Dalyan was just outside the current zones from which data was been collected, However, the methodology would allow for information from the Dalyan region to be included in the overall mapping data via eBird

The process of data collection has been described as ‘Citizen Science’

Citizen Science is an alternative to mainstream science research; it is scientific research were the people are the source of the information. Basically, public participation in science, citizen information is becoming increasingly important due to platforms to share information and transfer and create data.

In this context, Wildlife Foundation (WWF-Turkey) under the name of the European Bird Census Council (EBCC) this work is been carried out with the support of Bird Atlas Project in Turkey so far, it is one of the best examples of citizen science.

The ebird website describes the importance of data collection ‘Your contributions are a critical part of the puzzle, and every record you submit is a valuable piece of information.
The most effective and useful way to get your data into eBird is at the site level. Each time you go birding you should try to keep a complete checklist of birds with estimated counts of each species, and try to limit your checklists to fairly refined geographic areas (e.g., your garden, a local park, a favorite birding location)

The eBird dataset is growing rapidly, now collecting millions of observations per month. As such, it has caught the attention of many scientists and analysts wishing to use the data for science and conservation.’

From my perspective, the other useful tool available via eBird is that it places each ‘sighting’ or reported sightings on Google maps and therefore if you have a particular species you want to see you have a ready made data base with time of year the bird is seen and importantly the locations.

The main data collection for the ‘Turkey breeding Bird Atlas’ involved the team dividing the entire country into 50 sq. Kilometer grids and then further selecting specific grids for data collection. Dalyan was just outside one of these selected grids, although Okcular and surrounding areas are in it. Each 50 square kilometer grid was further divided into ‘Ten square kilometer’ grids and again within that to ‘One square kilometer’ grids. The methodology required that you then selected four of the ‘One square kilometer grids’ and birded this grid for an hour and then submitting your data. However, a lack of transport has prevented me following this format. So although I have not been able to submit data for the ‘Turkey breeding Bird Atlas’ via their preferred methodology as mentioned earlier they informed me that they will also be using any data for the whole of Turkey submitted via eBird within the study and the data will also include those submitted from outside the selected 50 square kilometer grids. So if you are birding in and around Dalyan you might consider using eBird to submit your findings, which will support this important project.

One area within the grid I managed to get to when renting a car was Göğü-Beli Geçidi / Göğü-Beli Pass which is a mountain pass from Seki to Elmali. I chose this route as after all these years as I have still not seen a White-Throated Robin which is easily seen around Seki and the pass, however, not in the summer so as I was here in April I could finally knock off this bird. The pass itself has some very good birding.

The White Throated Robin was duly picked up and this took me pass 200-bird milestone as I had unexpectedly picked up a pair of Ruff at the Rocky Outcrop at Eskiköy earlier in the week. However that’s where most of the birding ended!

I was in the right place and at the right time however, that other birding ingredient was missing LUCK! Once we left Seki and started to climb the road that leads over the pass, there was an increasing amount of vehicles and people, which culminated at the very highest point of the pass, just short of 2000 meters up , with a stage, TV crews, and hundreds of people milling around, health trucks and cabins all down the other side of the pass leading towards Elmali. At the very top of the summit was the finish line for the ‘ 52nd Presidential Cycle Tour of Turkey’ professional cycle race ,so there ended birding until we reached the other side of the pass and back on the road to Elmali. 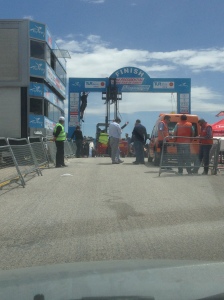 It wasn’t all bad news; we stopped on the way down in a wooded area and picked up a Eurasian Cuckoo, bird number 202 and just recently a Wren taking me to 203. Another recent sighting has been a White tailed Eagle a bird I haven’t seen in this area for some years so it was nice to see some raptors returning .

This entry was posted in Dalyan Birdwatching. Bookmark the permalink.